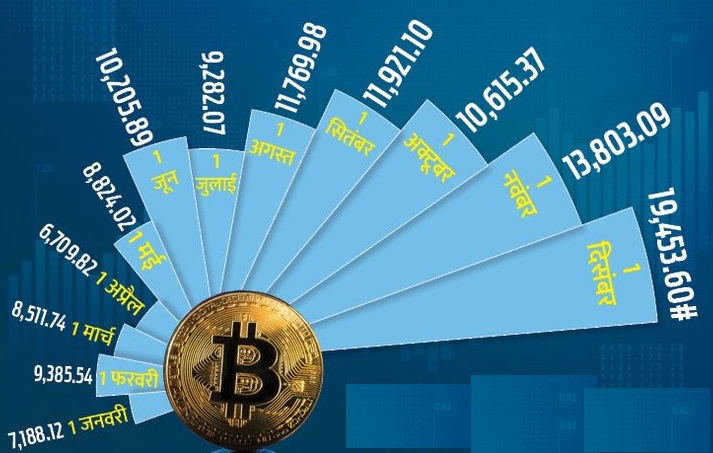 The cryptocurrency bitcoin has reached a record level this year. Bitcoin gained 9% on Monday. With this, it has reached this year’s record high level of $ 19,860, which is about 14 lakhs 62 thousands rupees per unit. Earlier, in December 2017, bitcoin reached $ 19,873 per unit. That is, according to then the price of one bitcoin was about 13 lakh rupees.

2020 has proved to be a big growth for bitcoin. So far this year, its price has increased by 175%. After Corona, the price of bitcoin went down to $ 4000 per unit in March. But, now due to the weakening of the dollar, bitcoin has rebounded rapidly. Gay Hirsch, managing director of US brokerage and trading firm eToro, says – Individuals and asset managers are buying bitcoins in large numbers. There are currently around $ 365 billion worth of bitcoins in circulation.

Reason for  Boom in cryptocurrency

The world’s largest asset management firm BlackRock (BLK) has predicted that Bitcoin could one day replace gold as a safe haven choice. This is also believed to be the reason for the rise in bitcoin prices. Bitcoin is also gaining momentum due to the rise in prices of small cryptocurrencies, Ethereum, XRP, LiteCoin and Steller.

Bitcoin was discovered in 2008

Bitcoin was discovered in 2008. Bitcoin was officially launched in 2009. In India, no cryptocurrency, including bitcoin, is legal yet.